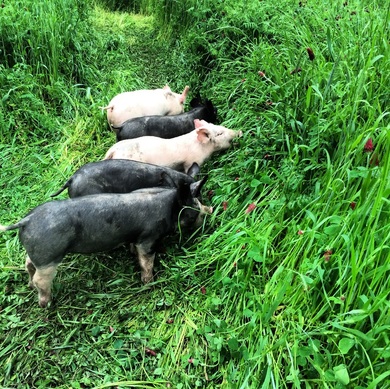 Pork has a high nutritional value, one that deserves our attention and appreciation. It is rich in protein and a range of minerals and vitamins. Pork is a good source of magnesium, phosphorus, potassium, iron, selenium, and zinc. Iron from animal sources is more readily available than from plant sources. Concerning vitamins, pork is particularly high in thiamine (vitamin B1) and riboflavin (vitamin B2).  It is a good source of vitamin B6, niacin (vit B3), vitamin B12, and vitamin B6. The fat of pork is an excellent source of the important fat-soluble vitamin D, a vitamin that is hard to get from food sources. It is especially rich in the fat from pigs raised outdoors in sunshine. 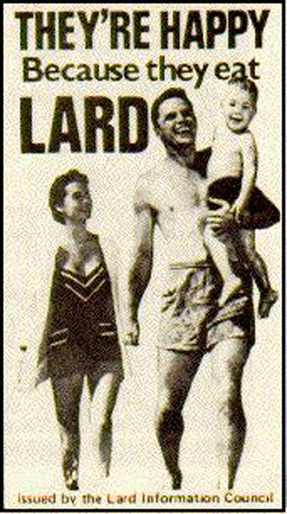 Poster from the 1950's, from http://www.jeanlamantia.com/celebrate-family-wellness-month-with-a-family-meal/
It is worth elaborating about pork fat, also called lard. Contrary to popular belief, it is a healthy fat to savor and use frequently! It is 40% saturated, 48% monounsaturated (including small amounts of antimicrobial palmitoleic acid) and 12% polyunsaturated. It is a stable fat, wonderful to fry with. The amount of omega-6 and omega-3 fatty acids in lard varies according to the diet of the pigs. If their diet is full of green plants and/or nuts, which are foods high in omega-3 fatty acids, then their fat will reflect this. This is why lard from forage grazed pigs is higher in omega 3 fatty acids, than lard from pigs fed a more conventional diet consisting mostly of grains.

We use lard daily, in a variety of ways. We sauté vegetables with lard, cook stir fries with it, and spoon it over vegetables roasting in the oven. We fry tortillas in lard to make the most delicious tortilla chips ever. Leaf lard, which is the finest grade of lard (the fat surrounding the kidneys), makes the flakiest, tastiest pie crust and biscuits. Contact us to get your hands on some healthy, delicious pork fat!